Tool steel refers to a variety of carbon and alloy steels that are particularly well-suited to be made into tools (punches, dies, molds, tools for cutting, blanking, forming, drawing, steering and slitting tools). Their suitability comes from their distinctive hardness, resistance to abrasion and deformation, and their ability to hold a cutting edge at elevated temperatures. With a carbon content between 0.5% and 1.5%, tool steels are manufactured under carefully controlled conditions to produce the required quality. The presence of carbides in their matrix plays the dominant role in the qualities of tool steel.

They are generally grouped into two classes:

One of subgroups of tool steels is high-speed steels (HSS), which were named primarily for their ability to machine and cut materials at high speeds (high hot hardness). It is often used in power-saw blades and drill bits. This group of tool steels is described in a separate article.

Pure iron is too soft to be used for the purpose of structure, but the addition of small quantities of other elements (carbon, manganese or silicon for instance) greatly increases its mechanical strength. The synergistic effect of alloying elements and heat treatment produces a tremendous variety of microstructures and properties. The four major alloying elements that form carbides in tool and die steel are: tungsten, chromium, vanadium and molybdenum. These alloying elements combine with carbon to form very hard and wear-resistant carbide compounds.

Example of Tool Steel – A2 Steel

A2 tool steel is an air hardening, cold work steel of group A steels containing molybdenum and chromium. A2 steel contains 5% of chromium steel which provides high hardness after heat treatment with good dimensional stability. The carbon content in A2 tool steels is high. A2 offers good toughness with medium wear resistance and is relatively easy to machine. A2 tool steel can be used in many applications which require good wear resistance as well as good toughness. Typical applications for A2 steel: 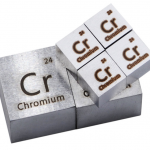 Properties of Tool Steel – A2 Steel

Strength of Tool Steel – A2 Steel

Ultimate tensile strength of tool steel – A2 steel depends on heat treatment process, but it is about 1860 MPa.

Yield strength of tool steel – A2 steel depends on heat treatment process, but it is about 1400 MPa.

Young’s modulus of elasticity of tool steel – A2 steel is 200 GPa.

Hardness of Tool Steel – A2 Steel

Rockwell hardness of tool steel – A2 steel depends on heat treatment process, but it is approximately 60 HRC.

We hope, this article, Tool Steel, helps you. If so, give us a like in the sidebar. Main purpose of this website is to help the public to learn some interesting and important information about materials and their properties.