Facebook Instagram Youtube Twitter
Skip to content
In atomic physics, the Bohr model if the atom (also known as the Rutherford-Bohr model) is modern model of the hydrogen atom introduced by Danish physicist Niels Bohr. All features of Bohr model of the atom can be summarized in Bohr’s Postulates. Material Properties

Bohr Model of the Atom In atomic physics, the Bohr model if the atom (also known as the Rutherford-Bohr model) is modern model of the hydrogen atom introduced by Danish physicist Niels Bohr working with Ernest Rutherford at the University of Manchester in 1913.

This model provides especially the solution to the problem of the failure of classical physics in the field of atomic physics. Classical electromagnetic theory, makes three entirely wrong predictions about atoms:

The Bohr model adopted Planck’s quantum hypothesis and he proposed a model in which the electrons of an atom were assumed to orbit the nucleus but could only do so in a finite set of orbits. Planck’s quantum hypothesis (Planck’s law) is named after a German theoretical physicist Max Planck, who proposed it in 1900. Planck’s law is a pioneering result of modern physics and quantum theory. Planck’s hypothesis that energy is radiated and absorbed in discrete “quanta” (or energy packets) precisely matched the observed patterns of blackbody radiation and resolved the ultraviolet catastrophe. 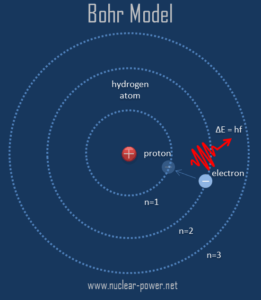 Based on this hypothesis, Bohr postulated that an atom emits or absorbs energy only in discrete quanta corresponding to absorption or radiation of a photon. During the emission of a photon, the internal energy of the atom changes by an amount equal to the energy of the photon. Therefore, each atom must be able to exist with only certain specific values of internal energy. Each of these stationary states is characterised by a specific amount of energy called its energy level. An atom can have an amount of internal energy equal to any one of these possible energy levels, but it cannot have an energy intermediate between two levels.

The success of Bohr model is in explaining the spectral lines of atomic hydrogen and the Rydberg formula for the spectral emission lines. Bohr’s theory was the first to successfully account for the discrete energy levels of this radiation as measured in the laboratory. The emission line spectrum of hydrogen tells us that atoms of that element emit photons with only certain specific frequencies ƒ and hence certain specific energies equal to E = hƒ, where h = Planck’s constant = 6.63 x 10-34 J.s and f = frequency of the photon.

Although Bohr’s atomic model is designed specifically to explain the hydrogen atom, his theories apply generally to the structure of all atoms. Subsequently, Bohr extended the model of hydrogen to give an approximate model for heavier atoms. Heavier atoms, like carbon or oxygen, have more protons in the nucleus, and more electrons to cancel the charge. Bohr’s idea was that each discrete orbit could only hold a certain number of electrons. In 1922, Niels Bohr updated his model of the atom by assuming that certain numbers of electrons corresponded to stable “closed shells”. After that orbit is full, the next energy level would have to be used. This defines an electron shell, which is the set of allowed states and it gives the atom an electron shell structure.

All these features of Bohr model of the atom can be summarized in Bohr’s Postulates:

We hope, this article, Bohr Model of Atom, helps you. If so, give us a like in the sidebar. Main purpose of this website is to help the public to learn some interesting and important information about materials and their properties.