Skip to content
What is Electron – Properties of Electron. An electron is one of the fundamental particles that make up matter. The electrons are negatively charged (-1e), almost massless particles. Material Properties

What is Electron – Properties of Electron

An electron is one of the fundamental particles that make up matter. All matter except dark matter is made of molecules, which are themselves made of atoms. The atoms consist of two parts. An atomic nucleus and an electron cloud. The electrons are spinning around the atomic nucleus. Electrons belong to group of elementary particles, known as leptons. Leptons are elementary, half-integer spin (spin  1⁄2) particles that do not undergo strong interactions. They are subject to the Pauli exclusion principle. This fact has key implications for the building up of the periodic table of elements.

The electrons are negatively charged (-1e), almost massless particles that nevertheless account for most of the size of the atom. Their rest mass equal to 9.109 × 10−31 kg (510.998 keV/c2) (approximately 1/1836 that of the proton). Electrons were discovered by Sir John Joseph Thomson in 1897. Electrons are located in an electron cloud, which is the area surrounding the nucleus of the atom. The electron is only one member of a class of elementary particles, which forms an atom.

Electrons in the Standard Model 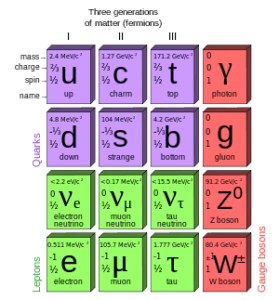 In the present Standard Model, there are six “flavors” of quarks, six quarks, just as there are six leptons based on a presumed symmetry in nature. The antiparticle of the electron is called the positron; it is identical to the electron except that it carries electrical and other charges of the opposite sign. When an electron collides with a positron, both particles can be totally annihilated, producing gamma ray photons.

The original idea for antiparticles came from a relativistic wave equation developed in 1928 by the English scientist P. A. M. Dirac (1902-1984). He realised that his relativistic version of the Schrödinger wave equation for electrons predicted the possibility of antielectrons. These were discovered by Paul Dirac and Carl D. Anderson in 1932 and named positrons. They studied cosmic-ray collisions via a cloud chamber – a particle detector in which moving electrons (or positrons) leave behind trails as they move through the gas. Positron paths in a cloud chamber trace the same helical path as an electron but rotate in the opposite direction with respect to the magnetic field direction due to their having the same magnitude of charge-to-mass ratio but with opposite charge and, therefore, opposite signed charge-to-mass ratios. Although Dirac did not himself use the term antimatter, its use follows on naturally enough from antielectrons, antiprotons, etc.

Beta particles are high-energy, high-speed electrons or positrons emitted by certain fission fragments or by certain primordial radioactive nuclei such as potassium-40. The beta particles are a form of ionizing radiation also known as beta rays. The production of beta particles is termed beta decay. There are two forms of beta decay, the electron decay (β− decay) and the positron decay (β+ decay). In a nuclear reactor occurs especially the β− decay, because the common feature of the fission products is an excess of neutrons (see Nuclear Stability). An unstable fission fragment with the excess of neutrons undergoes β− decay, where the neutron is converted into a proton, an electron, and an electron antineutrino. The electrons in an atom are attracted to the protons in the nucleus by the electromagnetic force. This force binds the electrons inside an electrostatic potential well surrounding the smaller nucleus, which means that an external source of energy is needed for the electron to escape.

The number of electrons in an electrically-neutral atom is the same as the number of protons in the nucleus. The total electrical charge of the nucleus is therefore +Ze, where e (elementary charge) equals to 1,602 x 10-19coulombs. Each electron is influenced by the electric fields produced by the positive nuclear charge and the other (Z – 1) negative electrons in the atom.

See also: Is an atom an empty space?

We hope, this article, Electron – Properties of Electron, helps you. If so, give us a like in the sidebar. Main purpose of this website is to help the public to learn some interesting and important information about materials and their properties.