Law of Conservation of Angular Momentum

In physics, the linear momentum, p = mv, has a rotational analog. It is called angular momentum  (rarely, moment of momentum or rotational momentum), L, and for an object rotating about a fixed axis with angular velocity ω, it is defined as:

It is an important quantity in physics because it is a conserved quantity:

The angular momentum of an isolated system remains constant in both magnitude and direction.

When there is zero net torque acting on an object, and the object is rotating about a fixed axis or about an axis through its center of mass whose direction doesn’t change, we can write:

Like conservation of energy and of linear momentum, this principle is a universal conservation law, valid at all scales from atomic and nuclear systems to the motions of galaxies. The angular momentum is a vector quantity and therefore it can be generalized as:

The vector sum of the angular momenta of the parts of an isolated system is constant.

A neutron star is the collapsed core of a large star (usually of a red giant). Neutron stars are the smallest and densest stars known to exist, but they are rotating extremely rapidly. This rapid rotation is a direct consequence of the law of conservation of angular momentum. As the star’s core collapses, its rotation rate must increase, because of conservation of angular momentum, hence newly formed neutron stars must rotate at up to several hundred times per second. Some neutron stars emit beams of electromagnetic radiation that make them detectable as pulsars.

Assume a neutron star of a radius of 7 x 105 km, which collapses under its own gravitation to a radius of 10 km. This star is rotating at a frequency of 1.0 revolution every 30 days. Assume that the star is a homogenous sphere at all times, and loses no mass.

From the law of conservation of angular momentum:

where the subscripts 1 and 2 refer to initial star and neutron star, respectively. The moment of inertia of a sphere about its central axis is:

The Euler’s turbomachine equations are: 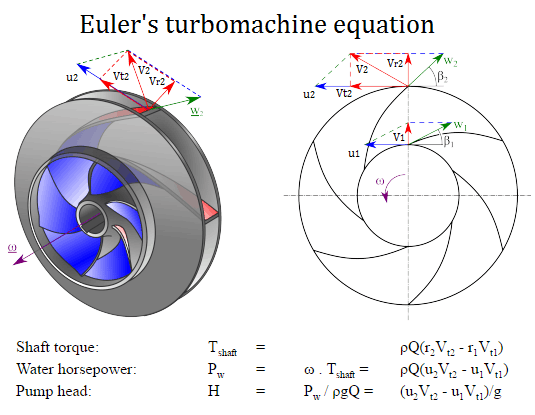 Euler’s turbomachine equations can be used to predict the impact of changing the impeller geometry on the head. It does not matter when we deal with a pump or with a turbine. If torque and angular velocity are of like sign, work is being done on the fluid (a pump or compressor). If torque and angular velocity are of opposite sign work is being extracted from the fluid (a turbine). Thus for the design aspect of turbines and pumps, the Euler equations are extremely useful.

We hope, this article, Law of Conservation of Angular Momentum, helps you. If so, give us a like in the sidebar. Main purpose of this website is to help the public to learn some interesting and important information about materials and their properties.