This isotope has the half-life of 2.34×107 years and has longer half-life than any other artificial actinide or fission product produced in nuclear reactors. 236U have about 190 times higher specific activity than the isotope 238U. This due to the fact 238U has the half-life about 190 times as long as 236U. This results in high contribution to radioactivity of reprocessed uranium. The amount of 236U present in spent nuclear fuel is directly proportional to the burnup levels and is dependent on initial 235U enrichment. For discharged fuel around 50 MWd/tU HM and enrichment of 4% of 235U it is typically around 0.5 wt%.

236U is neither a fissile isotope, nor a fertile isotope. 236U is fissionable only by fast neutrons. Radiative capture of a neutron leads to the formation of the isotope 237U, which quickly beta decays to the isotope 237Np. 237Np may absorb another neutron, thus results in formation of 238Np, which quickly beta decay to 238Pu. The presence of this isotope certainly does not contribute to the neutron economy. On the other hand the radiative capture cross-section for 236U is very low and this process does not happen quickly in a thermal reactor. 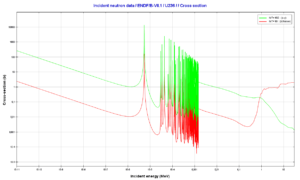 236U content as a function of burnup level of a PWR fuel.
Source: IAEA-TECDOC-1529 Management of Reprocessed Uranium

We hope, this article, Uranium 236, helps you. If so, give us a like in the sidebar. Main purpose of this website is to help the public to learn some interesting and important information about materials and their properties.