Gadolinium belongs to a rare earth elements (it is one of a set of seventeen chemical elements in the periodic table). In nuclear industry gadolinium is commonly used as a neutron absorber due to very high neutron absorbtion cross-section of two isotopes 155Gd and 157Gd. In fact their absorption cross-sections are the highest among all stable isotopes.

Gadolinium possesses unusual metallurgical properties, to the extent that as little as 1% of gadolinium can significantly improve the workability and resistance to oxidation at high temperatures of iron, chromium, and related metals. Gadolinium as a metal or a salt absorbs neutrons and is, therefore, used sometimes for shielding in neutron radiography and in nuclear reactors. Gadolinium is widely used as a burnable absorber, which is commonly used in fresh fuel to compensate an excess of reactivity of reactor core. Among all known stable elements, gadolinium has the highest thermal neutron capture cross-section (49,000 barns). Gadolinium barium copper oxide (GdBCO) has been researched for its superconducting properties with applications in superconducting motors or generators – for example in a wind turbine. 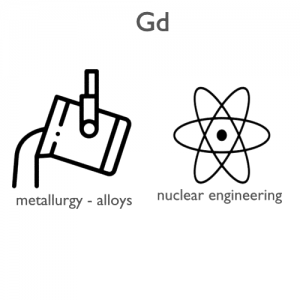 Production and Price of Gadolinium

Raw materials prices change daily. They are primarily driven by supply, demand and energy prices. In 2019, prices of pure Gadolinium were at around 1910 $/kg.

Gadolinium is produced both from monazite and bastnäsite. Commercially, it is recovered from monazite sand and bastnasite by extraction processes and ion exchange techniques. Monazite is an important ore for thorium, lanthanum, and cerium. It is often found in placer deposits. India, Madagascar, and South Africa have large deposits of monazite sands. The deposits in India are particularly rich in monazite. 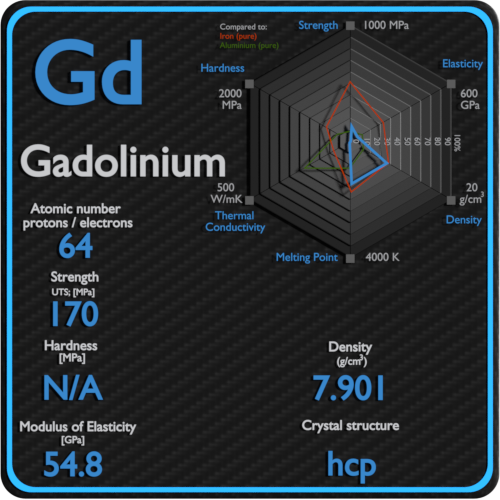 Yield strength of Gadolinium is 160 MPa.

Modulus of Elasticity of Gadolinium

The Young’s modulus of elasticity of Gadolinium is 160 MPa.

Gadolinium is has a hardness of approximately N/A.

A possible crystal structure of Gadolinium is hexagonal close-packed structure. Melting point of Gadolinium is 1313°C.

Boiling point of Gadolinium is 3000°C.

Thermal conductivity of Gadolinium is 11 W/(m·K).

Coefficient of Thermal Expansion of Gadolinium

Latent Heat of Fusion of Gadolinium is 10.05 kJ/mol.

Latent Heat of Vaporization of Gadolinium is 359.4 kJ/mol. Electrical resistivity of Gadolinium is 1310 nΩ⋅m.