It is a colorless, odorless, tasteless, non-toxic, inert, monatomic gas, the first in the noble gas group in the periodic table. Its boiling point is the lowest among all the elements.

Helium is used for many purposes that require some of its unique properties, such as its low boiling point, low density, low solubility, high thermal conductivity, or inertness. Of the 2014 world helium total production of about 32 million kg (180 million standard cubic meters) helium per year, the largest use (about 32% of the total in 2014) is in cryogenic applications, most of which involves cooling the superconducting magnets in medical MRI scanners and NMR spectrometers. Most clinical magnets are superconducting magnets, which require liquid helium to keep them very cold. 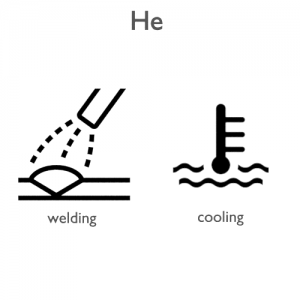 Production and Price of Helium

Raw materials prices change daily. They are primarily driven by supply, demand and energy prices. In 2019, prices of pure Helium were at around 52 $/kg.

For large-scale use, helium is extracted by fractional distillation from natural gas, which can contain as much as 7% helium. Natural gas contains methane and other hydrocarbons, which are the principal sources of heat energy when natural gas is burned. There are several methods used to upgrade natural gas. When the gas contains more than about 0.4% helium by volume, a cryogenic distillation method is often used in order to recover the helium content. Once the helium has been separated from the natural gas, it undergoes further refining to bring it to 99.99+% purity for commercial use. Yield strength of Helium is N/A.

Modulus of Elasticity of Helium

The Young’s modulus of elasticity of Helium is N/A.

Helium is has a hardness of approximately N/A.

A possible crystal structure of Helium is hexagonal close-packed structure. Coefficient of Thermal Expansion of Helium

Latent Heat of Vaporization of Helium is 0.0845 kJ/mol. Electrical resistivity of Helium is — nΩ⋅m.