In gamma spectroscopy, germanium is preferred due to its atomic number being much higher than silicon and which increases the probability of gamma ray interaction. Moreover, germanium has lower average energy necessary to create an electron-hole pair, which is 3.6 eV for silicon and 2.9 eV for germanium. This also provides the latter a better resolution in energy. A large, clean and almost perfect germanium semiconductor is ideal as a counter for radioactivity. However, it is difficult and expensive to make large crystals with sufficient purity. On the other hand, in order to achieve maximum efficiency the detectors must operate at the very low temperatures of liquid nitrogen (-196°C), because at room temperatures the noise caused by thermal excitation is very high. Since germanium detectors produce the highest resolution commonly available today, they are used to measure radiation in a variety of applications including personnel and environmental monitoring for radioactive contamination, medical applications, radiometric assay, nuclear security and nuclear plant safety. Production and Price of Germanium

Raw materials prices change daily. They are primarily driven by supply, demand and energy prices. In 2019, prices of pure Germanium were at around 3600 $/kg. Yield strength of Germanium is 135 MPa.

Modulus of Elasticity of Germanium

The Young’s modulus of elasticity of Germanium is 103 GPa.

Germanium is has a hardness of approximately 6. Boiling point of Germanium is 2820°C.

Thermal conductivity of Germanium is 59.9 W/(m·K).

Coefficient of Thermal Expansion of Germanium

Latent Heat of Fusion of Germanium is 36.94 kJ/mol.

Latent Heat of Vaporization of Germanium is 330.9 kJ/mol. 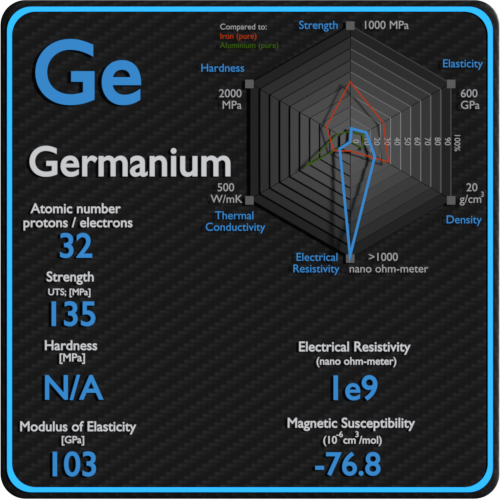