Ytterbium is beginning to find a variety of uses, such as in memory devices and tuneable lasers. It can also be used as an industrial catalyst and is increasingly being used to replace other catalysts considered to be too toxic and polluting. A small amount of ytterbium is used to add strength to specific steel types. Ytterbium can also be used as a dopant to help improve the grain refinement, strength, and other mechanical properties of stainless steel. Production and Price of Ytterbium

Raw materials prices change daily. They are primarily driven by supply, demand and energy prices. In 2019, prices of pure Ytterbium were at around 5300 $/kg.

Ytterbium is produced from its ores by reaction with lanthanum metal. For example, the element is extracted by solvent extraction and ion exchange from monazite. Monazite is an important ore for thorium, lanthanum, and cerium. It is often found in placer deposits. India, Madagascar, and South Africa have large deposits of monazite sands. The deposits in India are particularly rich in monazite. 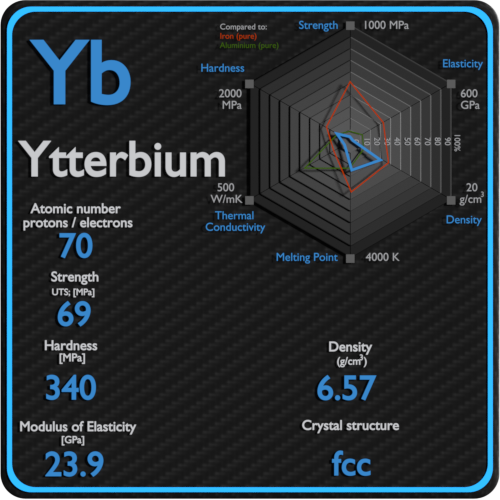 Melting point of Ytterbium is 819°C.

Boiling point of Ytterbium is 1196°C.

Thermal conductivity of Ytterbium is 39 W/(m·K).

Coefficient of Thermal Expansion of Ytterbium

Latent Heat of Fusion of Ytterbium is 7.66 kJ/mol.

Latent Heat of Vaporization of Ytterbium is 128.9 kJ/mol. Electrical resistivity of Ytterbium is 250 nΩ⋅m.