The most important uses of yttrium are LEDs and phosphors, particularly the red phosphors in television set cathode ray tube displays. Yttrium is also used in the production of electrodes, electrolytes, electronic filters, lasers, superconductors, various medical applications, and tracing various materials to enhance their properties. Small amounts of yttrium (0.1 to 0.2%) have been used to reduce the grain sizes of chromium, molybdenum, titanium, and zirconium. Yttrium is used to increase the strength of aluminium and magnesium alloys. 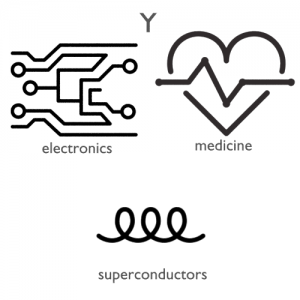 Production and Price of Yttrium

Raw materials prices change daily. They are primarily driven by supply, demand and energy prices. In 2019, prices of pure Yttrium were at around 2200 $/kg.

Commercially yttrium is refined from monazite and bastnasite sands which contain approximately 3% ands 0.2% respectively. Yttrium metal is commercially produced by the reduction of the fluoride with calcium metal, although other techniques also exist. Yield strength of Yttrium is 50 MPa.

Modulus of Elasticity of Yttrium

The Young’s modulus of elasticity of Yttrium is 50 MPa.

Yttrium is has a hardness of approximately N/A.

A possible crystal structure of Yttrium is hexagonal close-packed structure. Coefficient of Thermal Expansion of Yttrium

Latent Heat of Fusion of Yttrium is 11.4 kJ/mol.

Latent Heat of Vaporization of Yttrium is 363 kJ/mol. Electrical resistivity of Yttrium is 596 nΩ⋅m.