Lanthanum is not extensively used metal. However, its alloys have a variety of interesting uses. A lanthanum-nickel alloy is used to store hydrogen gas for use in hydrogen-powered vehicles. Lanthanum is also found in the anode of nickel metal hydride batteries (NiMH) used in hybrid cars. Lanthanum is an important component of mischmetal alloy. A typical composition includes approximately 55% cerium, 25% lanthanum, and 15-18% neodymium with other rare earth metals following. The best-known use for this alloy is in ‘flints’ for cigarette lighters. Production and Price of Lanthanum

Raw materials prices change daily. They are primarily driven by supply, demand and energy prices. In 2019, prices of pure Lanthanum were at around 640 $/kg.

The ores containing lanthanum, such as monazite, are typically contain a range of other rare earths. Consequently they undergo a series of chemical treatments to remove rare earths such as thorium and cerium to yield lanthanum salts. Monazite is an important ore for thorium, lanthanum, and cerium. It is often found in placer deposits. India, Madagascar, and South Africa have large deposits of monazite sands. The deposits in India are particularly rich in monazite. Yield strength of Lanthanum is 125 MPa.

Modulus of Elasticity of Lanthanum

The Young’s modulus of elasticity of Lanthanum is 125 MPa.

Lanthanum is has a hardness of approximately 2.5. Melting point of Lanthanum is 920°C.

Boiling point of Lanthanum is 3454°C.

Thermal conductivity of Lanthanum is 13 W/(m·K).

Coefficient of Thermal Expansion of Lanthanum

Latent Heat of Fusion of Lanthanum is 6.2 kJ/mol.

Latent Heat of Vaporization of Lanthanum is 414 kJ/mol. 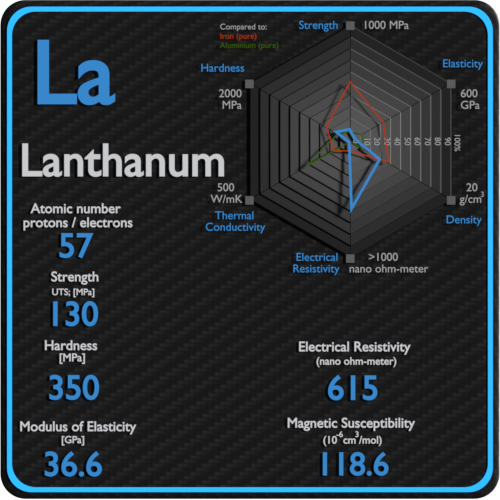 Electrical resistivity of Lanthanum is 615 nΩ⋅m.