The primary consumption of indium worldwide is LCD production. Demand rose rapidly from the late 1990s to 2010 with the popularity of LCD computer monitors and television sets, which now account for 50% of indium consumption. It is most notably used in the semiconductor industry, in low-melting-point metal alloys such as solders, in soft-metal high-vacuum seals, and in the production of transparent conductive coatings of indium tin oxide (ITO) on glass. Indium is considered a technology-critical element. 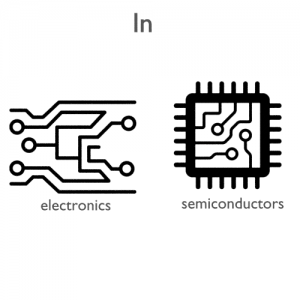 Production and Price of Indium

Raw materials prices change daily. They are primarily driven by supply, demand and energy prices. In 2019, prices of pure Indium were at around 600 $/kg.

Indium is produced mainly from residues generated during zinc ore processing. In the middle and late 1980’s, the development of indium phosphide semiconductors and indium-tin-oxide thin films for Liquid Crystal Displays (LCD) aroused much interest. By 1992, the thin-film application had become the largest end use. The amount of indium consumed is largely a function of worldwide LCD production. Increased manufacturing efficiency and recycling (especially in Japan) maintain a balance between demand and supply. Its main source material are sulfidic zinc ores, where it is mostly hosted by sphalerite. Yield strength of Indium is 1 MPa.

Modulus of Elasticity of Indium

The Young’s modulus of elasticity of Indium is 1 MPa.

Indium is has a hardness of approximately 1.2.

A possible crystal structure of Indium is body-centered tetragonal structure. Thermal conductivity of Indium is 82 W/(m·K).

Coefficient of Thermal Expansion of Indium

Latent Heat of Vaporization of Indium is 231.5 kJ/mol. Electrical resistivity of Indium is 83.7 nΩ⋅m.