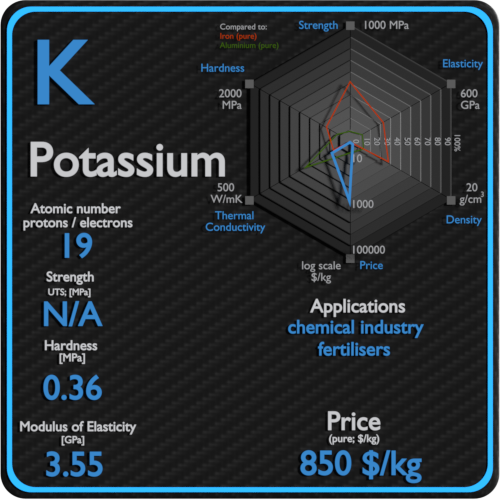 Potassium was first isolated from potash, the ashes of plants, from which its name derives. In the periodic table, potassium is one of the alkali metals. All of the alkali metals have a single valence electron in the outer electron shell, which is easily removed to create an ion with a positive charge – a cation, which combines with anions to form salts. Naturally occurring potassium is composed of three isotopes, of which 40K is radioactive. Traces of 40K are found in all potassium, and it is the most common radioisotope in the human body.

Potassium (K) is an essential nutrient for plant growth. It’s classified as a macronutrient because plants take up large quantities of K during their life cycle. Agricultural fertilizers consume 95% of global potassium chemical production, and about 90% of this potassium is supplied as KCl. Due to its high degree of reactivity, pure potassium is rarely used in its elemental /metallic form. It is used as a powerful reducing agent in organic chemistry. Potassium/Sodium alloys are It used as a heat exchange medium . The heat in the potassium warms water and makes it hot enough to boil. Then water is changed into steam, which is used to work devices that generate electricity. Production and Price of Potassium

Raw materials prices change daily. They are primarily driven by supply, demand and energy prices. In 2019, prices of pure Potassium were at around 850 $/kg.

Potassium compounds can be extracted from the earth as it is found in many solids, soil and seawater. The earliest version known to man was potash, which could be easily obtained by simply burning a tree and gathering potash from the ashes. The principal source of potassium – potash – is mined in Canada, Russia, Belarus, Kazakhstan, Germany, Israel, United States, Jordan, and other places around the world. 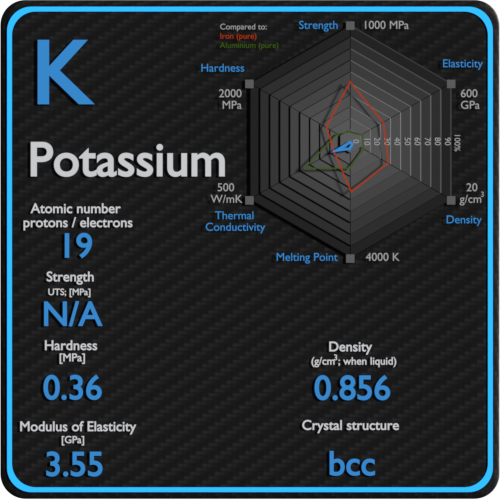 Yield strength of Potassium is N/A.

Modulus of Elasticity of Potassium

The Young’s modulus of elasticity of Potassium is 3.53 GPa.

Potassium is has a hardness of approximately 0.4.

A possible crystal structure of Potassium is body-centered cubic structure. Boiling point of Potassium is 760°C.

Coefficient of Thermal Expansion of Potassium

Latent Heat of Fusion of Potassium is 2.334 kJ/mol.

Latent Heat of Vaporization of Potassium is 79.87 kJ/mol. Electrical resistivity of Potassium is 72 nΩ⋅m.